Frustrated and angered by the program and staffing cuts facing their district, nearly 200 educators, administrators and parents from Paterson traveled to Trenton this week to protest the reductions made necessary by the state’s continued underfunding and urge legislators to increase state aid to the district.  Wearing stickers emblazoned with the words “Cuts hurt kids” and “Paterson students deserve better,” these stakeholders descended upon the Assembly Budget Committee hearing in a show of unity to advocate for their schools.

“We firmly believe that any reductions must not be made on the backs of the people who dedicate their lives to educate the children of this city,” declared PEA President John McEntee.  “Doing so only makes it that much harder for our students to receive the first-rate education they deserve.”

The proposed state aid is significantly less than what Paterson is entitled to under the school funding formula. This, coupled with the state’s call to increase the amount of funding the district must provide to the city’s charter schools by over $9 million, leaves Paterson’s public schools facing a budget crisis.  Moreover, a million dollars now needs to be allocated for the Passaic County Technical School to fund the expansion of their STEM program.  This combination has left the district with no choice but to propose a budget that seeks to cut over 120 teachers, resulting in class sizes of up to 40 students, as well as eliminate over 60 administrative positions.  In addition, these cuts will result in the elimination of SAT preparation courses, vocational education services, textbook purchases, science lab upgrades, art and music instruction, and intervention programs designed to address poor student performance in reading and math.

“Our district is already struggling with an educational deficit because of exploding class sizes, crumbling buildings and insufficient technology and teaching materials,” McEntee stated. “How are layoffs and reallocation of funds going to help solve any of these problems?”

PEA members and educators Lakresha Hodge and Charles Ferrer delivered testimony at the budget hearing, outlining all of the challenges the state’s chronic underfunding of Paterson has presented. 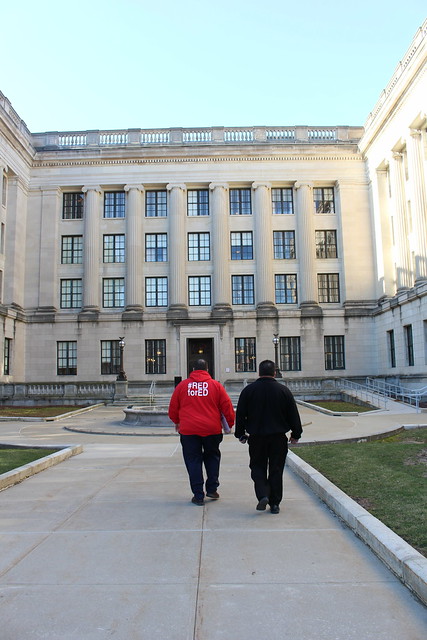 “As you have and will hear from several speakers, we have been underfunded for many years as a result of an unsuccessful state takeover. I know this because I am a product of Paterson Public Schools,” Hodge said. “I know what it used to be; I know what it is; and I know what it can be.”

Despite a steady increase in enrollment since 2013, Paterson has been flat funded for years, and, under the state funding formula, should be receiving $72 million more in state aid as of 2018-19.  Additionally, the district currently allocates over $50 million to the city’s charter schools, leaving the Paterson Board of Education with the unenviable task of trying to provide for the public school students while watching millions of dollars being funneled away from district projects and programs to those charter schools. To close the gap, Paterson would have to raise $51 million by increasing property taxes, but it would mean an average property tax bill of over $12,000 to achieve that amount.

“If we continue down the path of underfunding, our children will not receive the thorough and efficient education they are due by law and principle,” Hodge continued.  “Someone once said, ‘It comes down to what your priorities are and, if public education is about kids, then every decision we make should be focused on the question of whether it’s good for a child.”

McEntee agrees and vowed to continue to fight until more funding is secured.

“As we debate this war over school funding, our children are the ones who are suffering,” McEntee said.  “Frankly, they deserve better.”